HOW CAN I LEARN SPANISH? 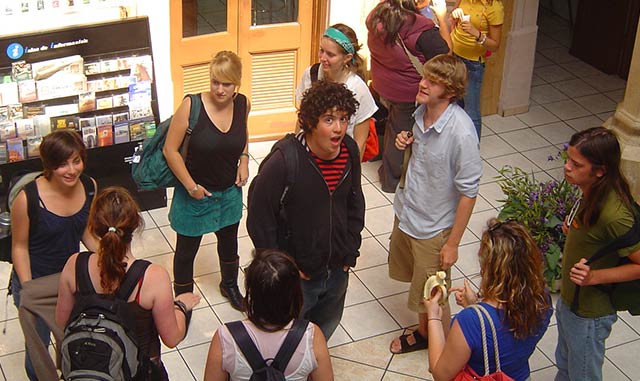 If you are interested in learning a new language and you are asking yourself how can I learn Spanish? you should consider the easiest, most effective and dynamic option would be to put yourself right in the mix.

This means learning Spanish in a country where it is the native language. I once asked my Spanish teacher at junior school, “How can I learn Spanish fast and effectively?” And she replied, “Go and live in Madrid, enroll in a language school and feel the words of Spanish surround every minute of every day.”

Although traveling all the way to Spain is not such an easy option for all, there are a number of countries with Central and South America where Spanish is widely spoken and here you will learn fast.

Let’s say you wanted to learn how to swim – would your swimming instructor use a harness to simulate weightlessness in a gymnasium? No. They would put you right in the water and begin the teaching process from there. So, how can I learn Spanish quickly? Get in the water, metaphorically a country like Mexico, and throw yourself deep in the language itself.

Join a language class and start with the basics. Do not try and hit the ground running – you won’t. The first task is to grasp the letters of the alphabet in Spanish. They are very similar, if not exact, to the alphabet used in the Portuguese language. However, here the similarity ends, because the way one should pronounce the Spanish letters is markedly different from the pronunciations used in Portuguese.

Remember that learning to pronounce the Spanish alphabet gives you an opportunity to correctly pronounce most Spanish words. Take the Spanish word hombre, which is a kind of slang or lazy interpretation of a guy or fellow; the word does not make any use of the “h” whatsoever. In fact, it’s silent, so you’d say it more like “ohm-bray”.

Learning to count in Spanish is also important – you would be surprised in any language how many times we refer to numbers: “Those two make a nice couple”, “We are three points behind Real Madrid” and “You need to go second left, and then walk for three blocks until you reach number 21 Esplanade Gardens.” Learn how to count in Spanish!

Then you should learn vocabulary – I found learning cognates – words which have a similar meaning in English and Spanish, widened my vocabulary to no end.