Spanish, a romance language spoken all over the world, has become a must-know for business people. Learning this tongue is also a benefit for people such as nurses, police officers and teachers. Hispanics make up a substantial part of the population in the United States and other English-speaking countries. This makes Spanish the most popular and practical foreign language to learn in these places. No matter your reasons for learning, mastering Spanish gives you invaluable knowledge that enriches you personally and professionally.

People have many reasons to learn Spanish: 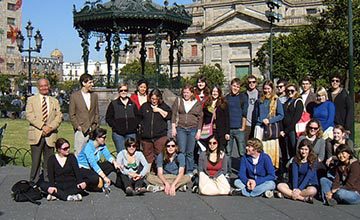 It just is smart business sense to learn Spanish:

If you speak English and want to learn a second language for purely professional purposes, Spanish is an excellent choice. In countries such as the United States, many people such as police officers, social services personnel, nurses, teachers and receptionists speak Spanish on a daily basis as part of their work.

Learning Spanish for Personal Reasons
There are plenty of good personal reasons to learn Spanish as well:
• Innate curiosity/desire
• You or a loved one dating someone who speaks Spanish
• New neighbors who speak Spanish
• More people in the community who speak Spanish
• Upcoming trip to Spain or another Spanish-speaking country
Spanish is an immensely popular and useful language. Learning is likely to benefit you in ways you never imagined it could.

Spanish Is Part of the Future in the United States

The United States is home to the fifth-largest Hispanic population in the world, just behind Mexico, Colombia, Spain and Argentina. In 2018, the population of Hispanics in the United States was nearly 60 million, according to the Pew Hispanic Research Center. Hispanics are the largest minority in the country. By 2050, Hispanics could account for about 25% of the U.S. population.

With these numbers, understanding of Spanish strengthens the U.S. community as a whole. In fact, Hispanics live all over the country. A good number are children who grow up learning English and Spanish (and perhaps other languages). When they grow up, they will be extremely competitive in the global marketplace due to their language skills.

The Best Way To Learn Spanish
The best way to learn Spanish is also how you learn Spanish fast: through cultural immersion. You travel to an area where people speak Spanish and immerse yourself in the language and the culture. Even more effective is if you can undergo some type of formal instruction before, during or after. A trip to any of these areas can get you speaking Spanish fairly quickly:

Spanish is the primary language in 20 countries. Go to an area such as Guadalajara, Mexico, and immerse yourself in life there. Work, dine and play with the locals. Avoid using English, and limit your visits to areas where English is spoken.

Of course, you may not have the time or resources to move temporarily to another city to learn Spanish. Fortunately, that’s not a problem. Many cities have neighborhoods or enclaves where people speak Spanish. Attend the events that they do, befriend them and practice communicating in Spanish only.

What Your Goals Are

Guidebooks, phrasebooks, language dictionaries and the like can be a huge asset during your immersion time. So can formal programs through institutions such as IMAC. It features small class sizes (one to 10 students per class). It also offers private lessons if you prefer them over group classes, with courses geared toward people with specific reasons to learn Spanish. These classes teach Spanish for law enforcement, medical personnel, businesspeople and financers, teachers, travelers, social services workers and others. There are even survival Spanish courses and Spanish classes for hotel management and clergypeople.

In other words, it helps to clarify your goals for learning Spanish and the level you want to speak at. If you are a manager who wants to communicate at a basic level with your employees, you may not need extended immersion. If you want conversational fluency, then communicating with native Spanish speakers in your city may suit your purposes just fine, or you could take an IMAC class.

How Long To Learn Spanish

The length of time to learn Spanish varies. The U.S. Department of State estimates it takes 575 to 600 hours, or 23 to 25 weeks. That’s a lot of time for cultural immersion! Not everyone has the time and resources to spend nearly half a year in Spain or Mexico to learn. However, immersion does give learners a huge head start. It can occur at any time in the learning process: when you are just starting to learn, when you have completed a class or two in an English-speaking country or when you have taken a lot of classes and want to test your level of fluency. Immersion need not be for months on end. A weekend, a week or two weeks, whatever you can spare, is good.

However, while total immersion is the quickest way to learn, it is not always possible or practical. Plus, the Department of State’s numbers are misleading. Yes, it may take 575 to 600 hours to achieve near-native fluency. That is when you have the ability to communicate in Spanish at a level of 99% or higher. In just half that time, though, people can achieve conversational fluency. Many get close to 95% proficiency in Spanish. Study for one hour a day, and you could be conversationally fluent in less than a year. The quality of your instruction matters, too. These approaches help you learn Spanish faster:

• One-on-one or small class size instruction and conversation practice
• Active learning (conversing in Spanish, helping others learn the Spanish you already know)
• Surrounding yourself with native or fluent speakers whenever you can

Much slower methods of learning include traditional classroom lectures, reading Spanish and watching Spanish on TV. Most people use multiple ways of learning. For example, some may take a couple of classes in college and do an exchange program for one semester in Spain. Alternatively, business people may receive one-on-one tutoring at work and deepen their knowledge with a few trips to a Spanish-speaking country. Someone else may learn through a smartphone app coupled with chatting with a local Spanish-speaking friend. Then comes a trip to Guadalajara for instruction and immersion.

The bottom line: Put in a few hours every day, and you could be conversationally fluent in a few weeks or months. Even just one class at IMAC gets you well on the road to learning Spanish. When you get home from Mexico, you have the motivation to keep learning, thanks to your early success. You should more apt to seek out local native speakers and to attend cultural events to practice your Spanish.